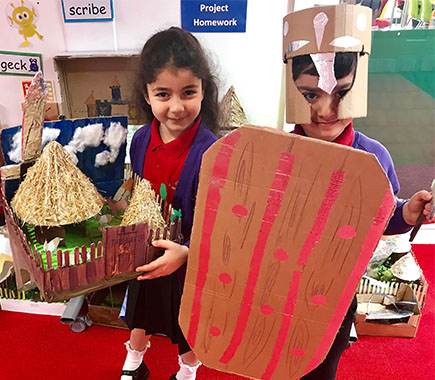 Last term, year 1, learnt about the Iron Age as a part of them learning about the prehistoric ages.

As a part of their homework, pupils were tasked with building Celtic Forts as the Celts lived in Britain at the time and made weapons that were used during the Iron Age.

Around 750 bc the Bronze Age turned into the Iron Age.

Iron was a stronger metal, which allowed for greater technological improvements, in particular the
iron tipped farming plough.

During this period, Britain developed the ‘Celtic’ culture under the influence of tribes from mainland Europe.

This involved intricate patterned artwork, a religion based around mysterious ‘druids’, and a warlike culture.

However, the Celts were not strong enough to withstand the Romans when they invaded in 54 bc.

The Celts kept no written records, so all our knowledge of them comes from archaeology, and Roman accounts.